Book Review: “The Death of Expertise” by Tom Nichols

If you’ve been reading this blog over the last few years, you’ll certainly have noticed a pattern: a reliance on established, peer-reviewed science and critical thinking.  Whether the topic is GMO vs. organic vs. conventional food, cavity prevention, cancer, juicing, or flossing, I always rely on expertise, accumulated and tested knowledge, and consensus over anecdotes, one-off studies, or fringe “experts” outside the scientific consensus.  On the other hand, if you read a lot of news and social media, you know that many people actively deny, ignore, or attempt to refute experts as “elites” or part of one or more vast conspiracies covering up things like “natural cures for cancer,” etc.  This trend seems to have significantly increased in recent months and years, too.  But why?  Are experts no longer needed?  Do they matter any more, or is Google all that anyone needs?  Can, and should, we still trust them?  Who is a real expert, and how do we know which are frauds?  Not easy questions, but they’re important ones. 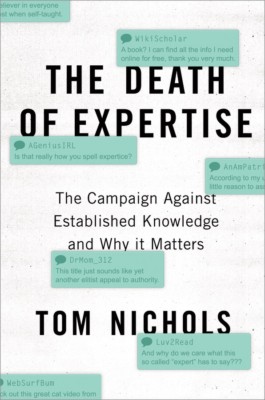 Tom Nichols, the author of “The Death of Expertise: the Campaign against Established Knowledge and Why it Matters,” is a Professor of National Security Affairs at the US Naval War College.  I first became aware of him when I read his article in The Federalist in Jan. 2014 by the same title, and I rediscovered him recently on Twitter in some political discussions.   While we have rather differing political views (he’s conservative and I’m liberal), I respect him and even agree with him on a number of issues.  And on the issue of “do experts and expertise matter,” I am 100% in agreement with him: YES, THEY MATTER.  But why do so many people disagree?

Let’s get this out of the way to start, as Prof. Nichols says early on:

“Experts are not infallible.  They have made terrible mistakes, with ghastly consequences.  To defend the role of expertise in modern America is to invite a litany of these disasters and errors: thalidomide, Vietnam, the Challenger, the dire warnings about the dietary hazards of eggs.  (Go ahead and enjoy them again.  They’re off the list of things that are bad for you.)” (pg. 10)

Yes, it’s true that “science” or “experts” often say one thing, only to change their collective minds years later.  It should be said, however, that “Science” (or the collective expertise in any field) is often misrepresented in journalism.  Given these publicly apparent changes in position, even when not supported by the actual evidence, it is understandable that the public may not understand the nuances.

At the same time, far too many people completely miss the fact that science is supposed to change its mind when new and better evidence is found and tested.  Science is a self-correcting process, not a fixed set of beliefs.  The same is true of experts.

Your Entire Life is Built on Others’ Expertise

The fact that experts can and will be wrong, though, doesn’t change the simple fact that almost everything we do and use in modern life is made possible by experts.  Consider the following:

Every single one of the listed items requires an amazing level of specialized knowledge, aka expertise.  Our current world would collapse completely if there were not experts who know to imagine, develop, build, and maintain our electric grid, waters supplies, roads and bridges, Internet, phones, farms, and more.  Whether you like it or not, your life depends upon experts.

“A modern society cannot function without a social division of labor and a reliance on experts, professionals, and intellectuals.  …  No one is an expert on everything.  No matter what our aspirations, we are bound by the reality of time and the undeniable limits of our talent.” (pg. 14)

The Cult of Ignorance Seems to be Growing

Professor Nichols points out that the idea of “my ignorance is as valid as your knowledge” goes much further back than Isaac Asimov’s quote above; Professor Nichols mentions the French observer Alexis de Tocqueville, “…who noted in 1835 that the denizens of the new United States were not exactly enamored of experts or their smarts.”  Clearly, this is not a new problem, but Prof. Nichols goes on to argue:

“The death of expertise, however, is a different problem than the historical fact of low levels of information among laypeople.  The issue is not indifference to established knowledge; it’s the emergence of a positive hostility to such knowledge.  …it represents the aggressive replacement of expert views or established knowledge with the insistence that every opinion on any matter is as good as every other.”

How often do we hear people say, “Well, everyone’s entitled to their own opinion?”  Even my 10yo daughter came home the other day and said that to me when I corrected her about something.  Ummmm, no….  Better put would be “everyone is entitled to their own INFORMED opinion.”  Even better: “You may be entitled to your own opinion, but you’re not entitled to your own facts.”  And given the level of political discourse at the highest levels of the US government today, with #AlternateFacts being a thing that the current Administration believes are real, this is a real problem!

As I wrote about in my article Why I Don’t Buy Organic, almost every major scientific organization in the world endorses GMO crop safety.  That means that literally tens of thousands of scientists across the world have examined the evidence and determined them to be safe.  Yet read the comments on any article about them, and the wilful ignorance and lack of knowledge of GMO opponents will (should) blow your mind.  Clearly, these are people who know absolutely nothing about science, farming, pesticides, finance, genetics, but they scream and shout and insult anyone who actually does.  Honestly, it’s depressing.  Why do people who’ve never even set foot on a far think they know anything about farming? 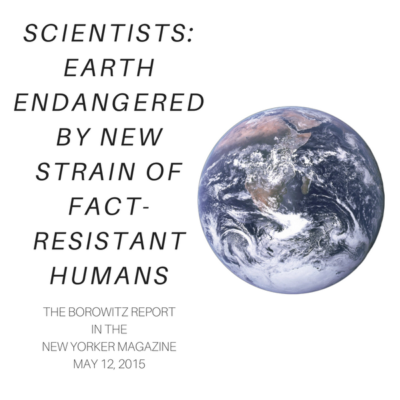 For that matter, why does Andy Borowitz’s article in The New Yorker on May 12, 2015 not even feel like satire? (click the image for the article)

How Much Do You NOT Know About Your Own Job?

This is what I wrote in my review of Prof. Nichols’ book on Amazon:  “To become a dentist, I had to study for 4 years of college and another 4 years (40 hours/week) of dental school. Since graduation nearly 20 years ago, I have taken at least 1,500 hours of Continuing Education at my own expense. And yet, despite my best efforts to be an extraordinarily good dentist, I am now more aware than ever of how much more that I don’t know yet. And that’s in my own profession, in which people rely upon me as an expert! Nevertheless, every week I hear or read from people that they somehow know more than I do, because they ‘did their research online.'”

Isn’t that interesting?  Despite having spent many years of my life dedicated solely to being the best dentist that I can be, including almost 19 years of doing dentistry as a full-time occupation, I still know how much more I still have to learn!  Yet others, who’ve maybe read a couple articles online, want to argue and tell me that I’m wrong.  That I’m a “shill for Big Dentistry.”  That I don’t understand fluoride or mercury or x-ray radiation or anything.  And even when I provide rock-solid scientific evidence, they flat-out ignore it.  They’re HOSTILE to it.  They’re living examples of the Dunning-Kruger Effect.

Why Do People Believe They Know More than They Do?

Prof. Nichols spends a fair amount of time going through three primary reasons for the growing idea that everyone’s knowledge is of equal value:

Underlying all of these is a fundamental weakness of our educational system: a lack of education in the arena of critical thinking skills, such that people lack the ability to discern bullshit from reality, because they are utterly unable to evaluate sources, statistics, etc.

And when you add onto that the Backfire Effect, in which people become more resistant to new facts when exposed to them, rather than being open to changing their beliefs, you have a real shitstorm of inability to tell truth from fiction.  I highly recommend listening to the Episodes 93-95 of the You Are Not So Smart podcast on the Backfire Effect to understand it better.

One issue on which Professor Nichols doesn’t really touch, but which I’d like to address here, is whether (and/or when) one might also fall afoul of the logical fallacy, “Argument from Authority.”  It is important to note that there are 2 distinct parts of this particular fallacy, as is explained at the provided link.  Professor Nichols’ book premise, that experts and their specialized knowledge should generally be trusted, is mostly supported by part 1 of the description:

It’s important to note that this fallacy should not be used to dismiss the claims of experts, or scientific consensus. Appeals to authority are not valid arguments, but nor is it reasonable to disregard the claims of experts who have a demonstrated depth of knowledge unless one has a similar level of understanding and/or access to empirical evidence.

The tricky part is that people too often rely on only one, or perhaps a few experts, or people whom they regard as experts, even when they aren’t.

This is why the idea of a broader consensus of experts is so important.  The development of a consensus is easier in the “hard” sciences, such as physics, chemistry, pharmacology, etc, but somewhat more difficult in fields like psychology, history, and politics.  After all, there’s no way to run comparative versions of history at the same time with different variables to see how different events and people impacted history, right?  But that doesn’t mean that there can’t be a general consensus about what things work and what can’t, and yes, that’s where experts are still far more likely to know more than the lay public.  And when a large number of experts all agree, the odds are in their favor over non-experts.

Is There Hope for the Future?

Throughout the book, Professor Nichols does a thorough job of exploring how this trend of genuine hostility towards expertise and pride in ignorance has grown to what it has, and why he doesn’t see it improving any time soon.  To tell the truth, he’s not terribly optimistic about the future, and yes, he’s clear that our current Administration is the result of these trends.  Sadly, I agree with him, despite my generally being quite optimistic about humanity’s future.

If there is hope, Professor Nichols says that it will come down to the general populace deciding to again value expertise.  However, that may only end up happening again if some catastrophe happens that forces many people to once again realize, “Hey, we wouldn’t have made it without those experts!”

While his conclusions are IMO somewhat depressing, I strongly recommend reading the book and following him on Twitter for further thoughts (and many examples of people completely missing the point of the book).  Hopefully, even if you aren’t so sure about expertise as a valuable skill now, he’ll get you to think long and hard about how dependent you (and all of us) are on experts, and that maybe they’re still worth looking up to after all, even if they do get some things wrong.