“If You Don’t Floss, You’ll Die,” Says One Charlotte Dentist 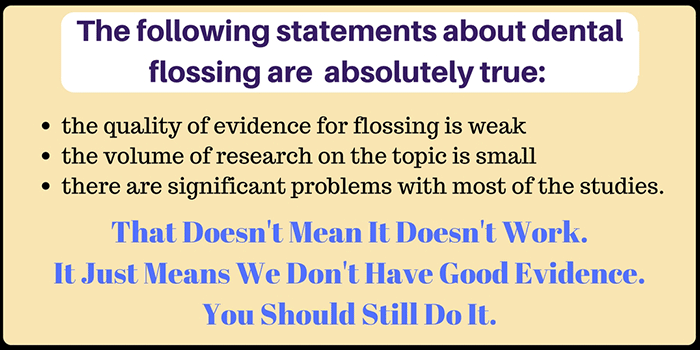 Oh ok, sue me for the clickbait headline….you’ll die if you do floss, too.  😀

The Story: Does Flossing Even Work?

Obviously, since I’m a dentist and have many dentists friends, one of the most commonly shared and widely discussed news stories this week has been about whether or not flossing is any good for you.  Naturally, because science journalists need traffic for their websites, too, there have been plenty of outrageous headlines:

And naturally, just as I’ve discussed in a number of other articles over the years, the science journalists have taken a story about the weak scientific evidence for flossing and suddenly turned it into “OMG FLOSSING IS USELESS!! DENTISTS HAVE BEEN LYING TO US FOR DECADES!!!!” 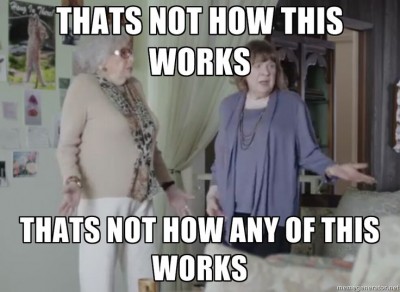 The Real Story: There Truly Isn’t Much Good Research

So here’s the crux of the story as quoted from the Associated Press report that set the storm in motion:

The AP looked at the most rigorous research conducted over the past decade, focusing on 25 studies that generally compared the use of a toothbrush with the combination of toothbrushes and floss. The findings? The evidence for flossing is “weak, very unreliable,” of “very low” quality, and carries “a moderate to large potential for bias.”

Let me be perfectly up front and honest here, because I have to be, given how much I’ve harped on the importance of critically evaluating and understanding scientific research and not blindly accepting science journalism, which can be really bad:

WHY Isn’t There Good Research on Flossing?

Now we’re getting to the crux of the problem! There are some pretty good reasons, why we don’t have good research about dental floss vs. interdental brushes (IDBs for short) vs. water picks, etc.  And here I’m going to quote one of my own favorite dental bloggers, Dr. Alan Mead of Mead Family Dental, because he summed it up nicely:

“The problem is the research, not the flossing. Maybe the design of the studies hasn’t been adequate. That’s a huge problem in medical research. Often times we think we’re measuring one thing when we’re not measuring that at all. You’ll notice that the evidence hasn’t recommended against flossing either. Flossing has been an accepted recommendation by dentists and hygienists for so long that it is no longer a hotbed of research inquiry.”

Put another way, it’s really hard to do good research on flossing.  Here are a few reasons:

I mean………c’mon people!!!  You actually expect that anyone is going to pony up the money to study this rigorously?  And even if they do, where are you going to get all those people to take part for a study that lasts for years?  IT AIN’T GONNA HAPPEN.

First, let’s be brutally honest.  Most of you aren’t flossing.  Heck, I’m not very good at flossing consistently.  Of course, there’s a good chance that contributed to the root canals, fillings, and crowns that I recently needed. But hey, do as I say, not as I do!

It is true that using dental floss will not remove the biofilm from your teeth that is responsible for tooth decay, gingivitis, or gum disease.  All by itself, dental floss doesn’t get rid of gingivitis, nor periodontitis.  It will not prevent cavities.  It’s not a super weapon against any of these things.  What is dental floss then?  It’s an additional tool that, if used correctly, does get chunks of food out from between your teeth that can contribute to plaque.  Plaque is what does actually lead to gingivitis, periodontitis, and cavities.  Floss will get rid of the food stuck there that makes your breath nasty and gross if you leave it there too long.  It reaches into places your toothbrush can’t reach.

So yes, I still recommend that you floss.  I have to, because otherwise, it’s a betrayal of all those years of study, indoctrination, self-delusion, and ignoring the fact that most people don’t do it, and they don’t die from it.  And I can’t do that.  I have to keep believing that you’ll die if you don’t floss.  😀  No, of course not.  You won’t die from not flossing.  But I truly do recommend you floss, because it helps keep your teeth cleaner if you do it well.  If you don’t….well….you don’t.  Don’t feel guilty about it.

But please still do it for the week before your dental checkups to impress our wonderful hygienists, ok?  They’ll thank you for it.  🙂  And for more tips on how to keep your teeth and gums healthy, check out this article I wrote a few years ago How to Reduce or Prevent Cavities & Gum Disease.  Unless you happen to be one of those crazy lucky people who don’t get cavities, but especially if you’re unlucky and get a cavity that grows really fast.

or Request an Appointment Online!