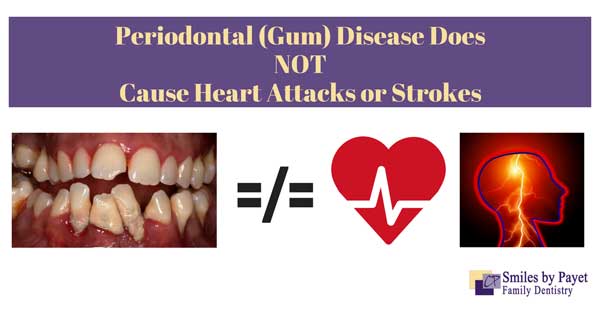 I was recently reminded of claims that periodontal disease is associated with medical conditions like heart attacks, strokes, pre-term births, and diabetes.  Yes, there is an association among those conditions, that’s true.  However, some dentists and hygienists try to scare patients into treatment by claiming that gum disease actually causes those conditions.  That’s simply not true!

One of the most recent articles touching on this touchy subject was by Dr. Chris Kammer, titled “Your Gums are a Cesspool of Infection…and Most Dentists Don’t Care!” as a blog article for the American Academy for Oral Systemic Health; an organization that he coincidentally co-founded in 2010.  The entire purpose of this organization, incidentally, is based on the idea that oral disease (primarily periodontal disease) has significant links to disease in the rest of the body.

This link between the oral cavity and the rest of the body was first hypothesized and published in 1989 in two Scandinavian reports (Mattila et al in the BMJ, and Syrjanen et al in the J. Inter. Med) and studies continue to this day.  To this day, however, the results are simply not strong enough to make claims about causality.

Just as I’ve criticized holistic and alternative medicine and dentistry as junk, it’s crucial that dentists be honest about the level of evidence for anything that we recommend – even flossing!  When we see things that seem to be connected, like gum disease seems to be connected with heart attacks and strokes, we have to ask: is it correlation (coincidental), or is it actually causal (one thing directly leads to the other).  Yes, there seems to be a strong correlation between gum disease and heart attacks and strokes, even after accounting for other common risk factors like smoking, age, etc.  At some point, we may find that gum disease genuinely contributes to, or worsens, cardiovascular disease, but even that study isn’t “proof.”  Not yet.

A reminder: if you look hard enough, you can find correlations between the most remarkable things, as you can see at Spurious Correlations.  Check out these hilarious 2 examples!

Before we even address the connection between oral infection and overall body health, let’s talk about how prevalent gum disease is in the US population.  Referencing again the article by Dr. Kammer, he lists a few scary-sounding facts.

Let’s step back from the overblown hype and see what the American Academy of Periodontology and the Centers for Disease Control (CDC) say.  This is their specialty, so it’s reasonably safe to think they know what they’re talking about.  Hmmmm, they say it’s more like 47.2% of all Americans, not 80%.  Sure, nearly half is still a whopping big number.  Dr. Kammer seems to think that gingivitis is the same as real gum disease.  That’s false.  At one point he says, “Because bleeding = disease.”  Oh jeez, no it doesn’t!  I wrote about the differences between gingivitis and periodontal disease previously, but here’s a quick recap:

Here’s how I describe the difference to my patients to make it understandable.

“Gingivitis is similar to what happens if you get a paper cut; it gets red, irritated, sore, and bleeds easily if you rub it, which is similar to the bleeding you see with gingivitis during brushing or flossing. But if you put some ointment and a band-aid on the paper cut, it quickly heals, just as gingivitis will go away quickly with more regular brushing and flossing and a good cleaning by a dental professional.

Periodontitis, though, is what happens if you don’t put ointment or a band-aid on, and then you go out gardening in bare hands.  Dirt gets into the cut and cause more irritation and bleeding, while the bacteria begin to fester and grow, causing genuine swelling and infection that spreads through the bloodstream, kills the surrounding skin and muscle, and eventually turns into gangrene if not treated.” Both periodontal disease and that infection of the paper cut require more aggressive treatment to bring it under control.”

The big difference between periodontal disease and an severely infected cut, though, is that it’s impossible for us to completely rid the mouth of the bacteria that cause the infection, even with antibiotics.  Periodontal disease can not be cured, not even with LANAP.  That’s why it’s important to keep it under control with more frequent dental checkups called “periodontal maintenance” visits.  Other steps that can help include using a mouthrinse containing chlorhexidine, an effective antibacterial.  Electric toothbrushes have been shown to be more effective than manual brushes, especially for patients with disabilities that limit hand dexterity.  Water picks and interdental brushes are also helpful for getting in between teeth and into areas where bacteria are hard to reach.

How Does This Alleged Connection Work?

The basic idea behind the oral-systemic collection is two-fold:

To be fair, it is true that chronic inflammation is not healthy and probably does damage other parts of the body.  The same is true for the periodontal bacteria that spread through the body.  The problem is that we can’t yet quantify just how not healthy these are and how much damage they do.

Experts Agree: Gum Disease Does Not Cause Heart Attacks or Strokes

Translated into normal English, here’s what those 2 big summary studies tell us: 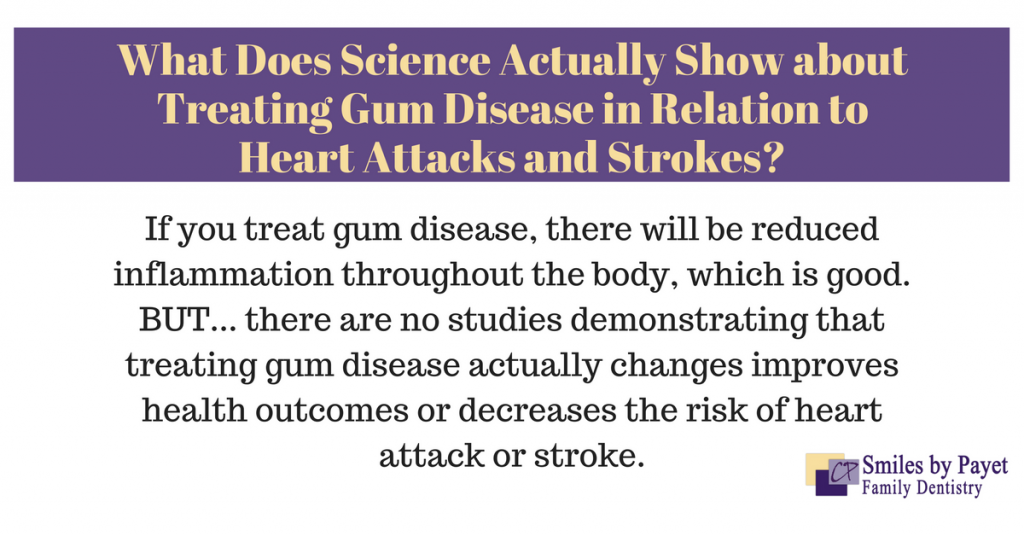 Periodontal (Gum) Disease is Bad Enough All By Itself

Look, gum disease is bad for you, there’s no two ways about it.  It is a chronic infection by some nasty bacteria that can cause all of the following:

If those aren’t good enough reasons for you to get your periodontal disease treated, then nothing else I tell you will make a difference.  Telling you that it might lead to an increased risk of heart attacks or strokes sure won’t.

Is Gum Disease Under- or Over-Diagnosed?

About the only thing that Dr. Kammer got right in his article, honestly, is that periodontal disease is drastically undiagnosed in the USA.  While the source of his statistics on how many insurance claims are for routine cleanings is questionable, they’re close.  After all, approximately half the population doesn’t even see a dentist on an annual basis; clearly, many people have gum disease but don’t get it treated.  But it’s important to remember a few points:

However, it’s also fair to say that many dentists don’t diagnose or treat periodontitis.  Not in our office though.  We take gum disease very seriously; we don’t want you carrying a chronic infection in your mouth that will get worse.  Check our page on LANAP, or Laser Periodontal TherapyTM, for information about both Scaling and Root Planing (non-surgical therapy) and LANAP itself.  We LOVE doing LANAP for our patients with moderate-to-severe periodontal disease; it’s remarkably comfortable and amazingly effective.

If you’re concerned that you have Gum Disease: