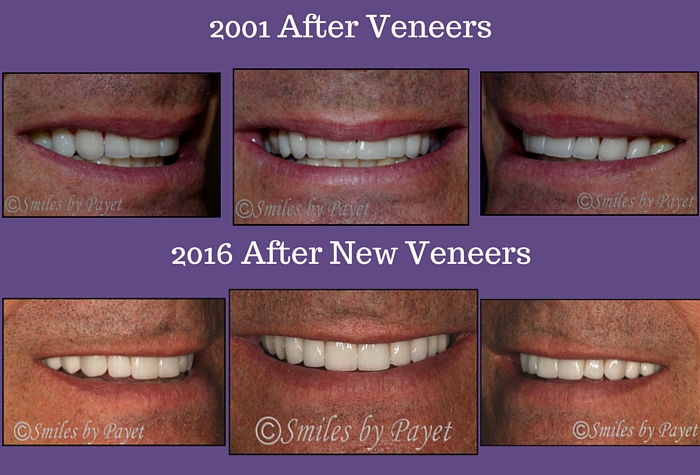 There are a number of important questions to ask when considering cosmetic dentistry, including porcelain veneers:

Recently, we saw a patient for whom I did 8 porcelain veneers in 2001, and his case illustrates all of these questions, so without further ado, let me introduce Steve’s teeth.  (He’s a rather private person and prefers not having his portrait used, and this is something that we always respect.)

Please forgive the varying levels of photography you see through this article; the first photos were originally slide film that were scanned from negatives, then they move through a series of progressively better cameras and a progressively improving photographer (me). 🙂  I’ve tried to even them out with Photoshop, but rest assured, absolutely nothing else has been done to the photos.

Steve originally came to us because he was getting ready to attend a big high school reunion, if I recall correctly.  It was on kind of short notice, too, as in he was catching a flight the next day.  Yikes!  But we arranged to see him later that day and started him on 8 veneers to lengthen his worn-down teeth.  He looked pretty good with the temporary veneers for the reunion, and we saw him a few weeks later to bond in the real porcelain veneers.  So back in 2001, the first set of 8 veneers took Steve’s smile from here: 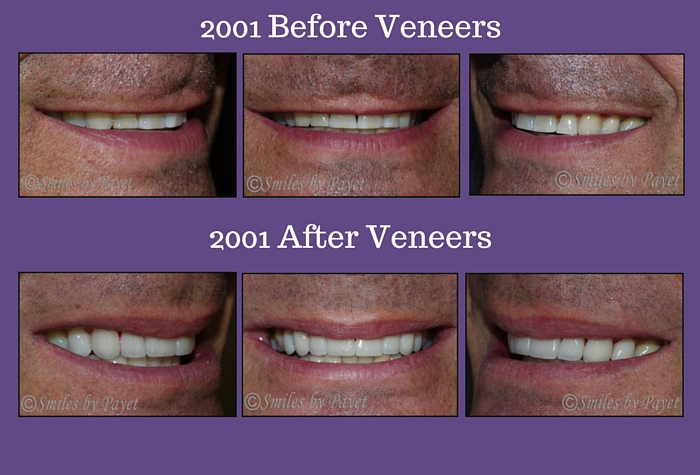 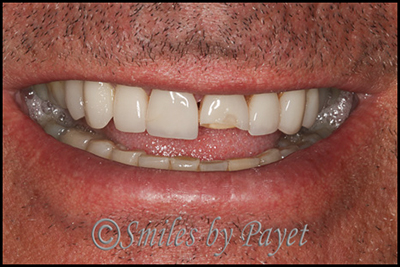 Given that Steve has a very demanding job that requires a lot of travel, we didn’t see a lot of him after the first veneers were done.  Then he moved out-of-state and we obviously didn’t see him at all for many years.  Imagine my surprise, when I got a text message on a Friday evening in August that 1 front veneer had broken and another had a crack in it!  Fortunately, Steve still did business in Charlotte and was on his way here when it occurred.  The tricky part?  He was leaving for a big vacation in just a week.  So the only thing to do was to see him on a Saturday morning to fix him up.  As it happened, a 3rd veneer had a crack, too.  After some discussion, we decided to re-do those 3 veneers for now, and we’d consider whether or not to redo the 4th front tooth if it didn’t match just right.

So why did Steve have 3 cracked veneers?  A simple but powerful reason: bruxism associated with sleep apnea.  Steve was diagnosed with sleep apnea a few years ago and had started wearing a snore guard that doubled as a nightguard.  But once porcelain is stressed, it can’t ever be unstressed, so the years of bruxism before the snore guard took their toll and eventually the porcelain cracked.  Also, his lower front teeth were already worn and uneven, which also put stress on the porcelain.  Veneers on the lower teeth would be an option to reduce that risk, but they’re not enough of an issue for Steve to do.

This is why we always recommend a nightguard to protect your investment in cosmetic dentistry!

A Commitment To Patient Satisfaction, Even Under Pressure 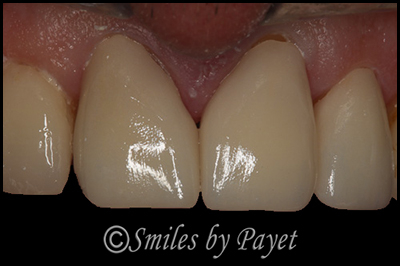 While we typically work with an boutique dental lab for our big cosmetic cases, there was no time for that in Steve’s situation.  Our local lab worked super hard to get the 3 veneers done as fast as possible, and we saw Steve the next Thursday at lunch to bond them in.  However, the first set honestly did not look too good.  In fact, they were kinda bad.  Like this:

With a lot of photos and notes, we returned the case to the lab for a rush fix, and they did a far better job this time!  We saw Steve back the very next morning, Friday at 8am, to bond the improved veneers in before he left for the airport.  Seriously.  We bonded them in, checked his bite, and he drove to the airport for his flight.  No pressure!  He looked a heck of a lot better like this at that point:

But while the 3 new porcelain veneers did look much better, Steve and I ultimately agreed that we should have done the 4th front tooth for the best match, so early in 2016, we started redoing the 2nd right front tooth look like the other 3 front teeth.  Even then, though, Steve had a few small gripes about the other 3, and to be honest – he was right.  So after more discussion by text and phone about his ultimate cosmetic goals, we agreed that the right thing to do was to redo all of his veneers and even add the first molar on each side.  This time, we would work with our top lab, because Steve wanted only the best.  The new goals included:

Veneers Can Last for Decades and Rarely Fail All at Once

Steve’s case is fairly typical in a number of ways and illustrates a number of things about the durability of veneers, as well as the reasons they fail:

Hopefully this article has provided answers to many or all of your questions about porcelain veneers, their durability, what happens when they need replacing, why they often need replacement, and how to care for them so they’ll last as long as possible.  I do have other patients with veneers that we did 15-16 years ago that are still going strong and not in need or replacement yet; I’m looking forward to seeing how much longer they last!

To make an appointment for a Complimentary Smile Consultation: