Treating Severe Migraines is So Satisfying

While it’s not a huge part of our Charlotte family dental practice, treating migraine sufferers is one of the most satisfying things we do, especially when those patients have seen multiple medical specialists, had every scan known to medicine, tried every current and experimental medication…without any relief.  This is the story of one of our most recent and dramatic successes, made even more gratifying because he’s a distant relative of mine.

Bob Suffered from Non-Stop Headaches for Over 3 Years

While Bob and I are distant relatives, we never even knew of each other.  A cousin from New Jersey on my Dad’s side of the family contacted me through Facebook, asking if we could help, and of course I said we’d give it a try.  During Bob’s initial consultation in March 2013,  we talked for a solid 90 minutes about his headache history, the specialists he’s seen, the medications he’s tried, and how basically nothing helped.  Given all that, I was hesitant to promise much, but when all other doctors have failed, that’s often a sign they’ve missed the dental connection.

In a number of ways, Bob’s case is one of the most unusual that I’ve ever treated, so let me list a few of the details:

But in one very important way, and largely because of the last 2 items I listed, Bob was very typical of the other migraine/headache sufferers whom we’ve helped:  Bob was desperate and tired of suffering.

One of the biggest difficulties in treating chronic migraines and tension headaches, is that every branch of medicine has some of the necessary information, but none of them have all of it, so each branch tends to only treat those cases they understand.  The other cases get stuck in the “We can’t find anything wrong with you, so you just have migraines/headaches. ”  Sadly, the one branch most often overlooked is dentistry.  And while teeth themselves aren’t the cause of  headaches and migraines, the loop of nerves – teeth – muscles is one that can cause tremendous pain and suffering.  When all other treatments fail, this is one of the most common reasons.

In simplest terms (and please bear in mind, I am trying to drastically simplify a very complex subject), when a person’s triggers are set off, the nervous system starts activating muscles at times and intensities that they shouldn’t, and many of these muscles are at work in your face, head, and jaws.  When those muscles are activated excessively, they spasm, much like a spasm in your calf or arm; the difference is that these spasm are kept going by those hyperactive nerves.  And the teeth?  Well, the teeth are often in the way of those muscles reaching their full contraction, and when those muscles encounter the resistance of the teeth, the resistance sets up a feedback loop, where the resistance becomes a trigger for the nerves – which activate muscles – which force teeth together – which creates resistance – which triggers the nerves…………..etc etc etc.  It’s a vicious circle that results in severe pain wherever the muscles are being active, and that can be anywhere in your head, neck, and shoulders.

Fortunately, if we can throw a wrench into that loop and disrupt it, we can decrease or even stop the loop, and once the loop is broken, patients experience wonderful relief. 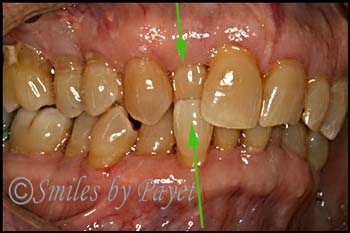 In Bob’s case, we identified this little “triangle” of locked up teeth on his right side as potentially a trigger area.  Certainly, when he closes together here, his jaws have virtually no wiggle room.  The odd thing was, this was the way Bob’s teeth had been for his entire life!  These teeth most likely didn’t shift in some strange way that Thursday afternoon on the golf course, but something suddenly upset the balance in his nerves, teeth, and muscles.  When I saw this, I had a strong suspicion that this was the problem, although it is strange for something to change from “no-pain” to “pain” so suddenly. 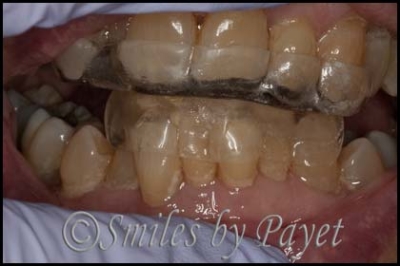 So after discussing all the pros and cons, Bob and I agreed to try a specialized type of dental nightguard called a DAASA.  While my lab does my models for me, I personally make and customize every one of these for our patients, and it usually takes a couple weeks to get it all done.  There are 2 parts: 1 for the top front teeth, and 1 for the lower front teeth, made so that they slide easily against each other to eliminate all resistance.  And when only the front teeth touch, all the jaw muscles can’t squeeze so hard, and so they relax, which seems to relieve the pain. 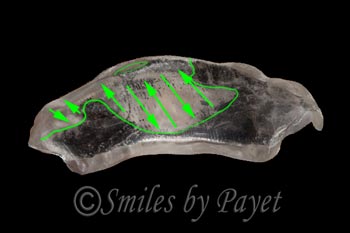 One advantage of the DAASA is that it can actually show us a person’s grinding or clenching pattern.  A colleague of mine has tracked well over 450 patients over a minimum of 5 years, and he found that – no matter what treatment was done – that patterns stays remarkably unchanged.  We’re not trying to change the pattern – simply adjust for it, and control it, so that it can’t cause pain.

How are Bob’s Headaches Now?

Some patients respond to a NTI-type nightguard, such as the DAASA, extremely fast – it can be as fast as 1-2 weeks.  Some patients take longer, as in Bob’s case.  In fact, it took us a solid 4 months of treatment, with visits every 2-4 weeks for refinements and documentation of his progress, before we were ready to declare victory.  But what a victory it was!  When Bob first came to see me, he rarely managed more than a couple hours per day with minimal head pain; he couldn’t even remember what it felt like to have a few solid hours with no pain at all.  But now?  Well, just check out Bob’s testimonial that we received today, and you be the judge. 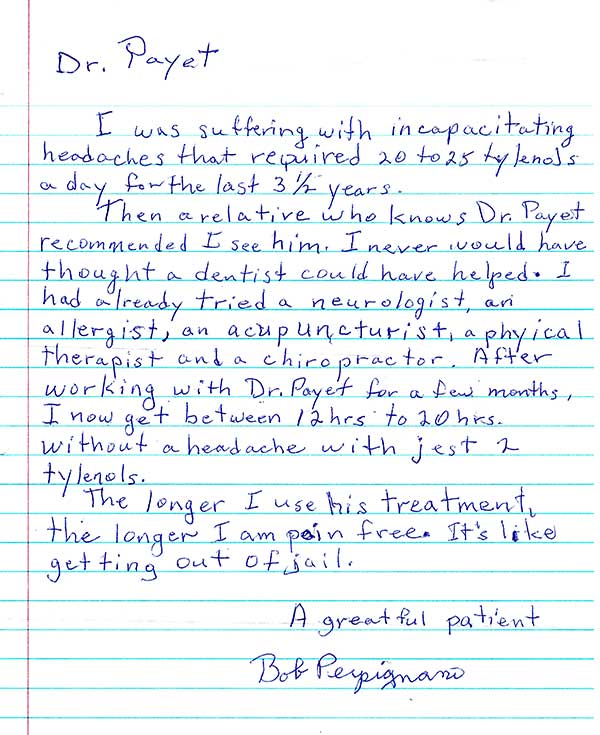 If you need help with migraines,