We Do NOT Discriminate

Let me start off by saying that, while I’m not a native North Carolinian, I have lived here for almost 26 years and have deep family roots in the state, as my Mom was born in Lewisville and grew up in Albemarle (most of our extended family still live in the state, too), and my parents met in Chapel Hill during college.    I chose to start my practice here and live here with my wife and daughters.  Charlotte, NC has been my home for the last 18 years & will probably be our home until we die.

However, since the passage of House Bill 2 by the NC Legislature and Governor McCrory’s signature on Wednesday, March 23rd, 2016, I am now deeply ashamed to say that I am from North Carolina.  And while I generally try very hard to avoid discussing politics within our practice, in person or in writing, I believe this is a time to stand up for what I believe is right, both personally and professionally.  The following article will describe why I believe that HB 2 is wrong and the NC Legislature should repeal HB2 immediately: 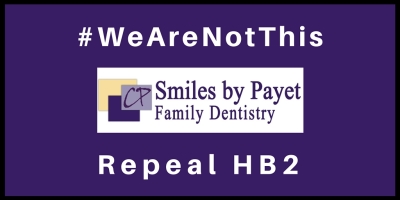 Repeal HB2: It is Immoral & Discriminatory

First and foremost, I believe that our state legislature and Governor have now signed into law a measure that makes North Carolina among the most discriminatory and anti-LGBT in the nation, and that is wrong.  The United States Constitution and long legal precedents have determined that ALL people are deserving of equal rights, not just the ones approved of by any single constituency or any religion.  As is often said, “Rights can’t be voted on; that’s why they’re called RIGHTS.”  But the NC Legislature and Governor have now put into effect a law that very specifically discriminates against certain individuals in our society.  The fact that they are trying to justify it based on moral grounds is equally reprehensible and disgusting to me.  It deeply saddens me to see the discrimination and hate of the past, previously focussed on women, African-Americans, Catholics, Native Americans, or Jews (among others), now revived against LGBT individuals.  Regardless of what religion you may or may not follow, I believe that all humans are deserving of equal treatment simply because it is just and right.

This is something that many people may not understand, but which has potentially drastic consequences for anyone who has experienced discrimination and wants redress from the courts.  Even if you are a member of a protected class, HB2 has now eliminated the ability to file suit in state courts.  This includes all of the following:

Here’s a perfect example happening as we speak.  A NC woman suing for age and disability discrimination has now learned that her case can not go forward, and she must try to file suit in federal court, which is much more expensive, takes much longer, and there is no option to receive damages for pain or suffering.  To make my point on how bad this is for North Carolinians, consider this.

and because of HB2, not one of them could sue me in NC Courts.

Now to be perfectly clear – I have absolutely no intention of firing ANY of my Team members, because we value all of them for being wonderful human beings and hard workers who take great care of you.  Nor would I be such an a**hole to ever fire anyone for any of those reasons.  But my point is that I could, and they would have no recourse in North Carolina courts thanks to HB2.

In one fell swoop, our Legislature and Governor have put at risk over $4 BILLION in Title IX funding for our schools from the US Dept. of Education, another $1 BILLION dollars in funding for our public infrastructure from the US Dept of Transportation, and perhaps more billions from the Dept. of Housing and Urban Development (HUD).  To foolishly endanger that kind of funding for our schools, roads, and public housing, which still have not reached the levels of funding prior to the Great Depression of 2008, is flat out stupid.  My older daughter attends NC State University, and my younger daughter is in 3rd grade in Charlotte-Mecklenburg Schools, both of which would be devastated by the loss of federal funds.  Sure, I can afford to take my daughter out of public schools and pay for private, but what about all the other children who absolutely depend on public education?  And I personally like having safe bridges and roads and infrastructure, and many of our state residents depend on public housing that depends on those federal funds.

Quite frankly, to jeopardize the education and infrastructure of our state in the way that the Legislature and Governor did, is unbelievably irresponsible.  It would be utterly impossible for the State of North Carolina to make up those funds if they were lost, which would destroy the educational system, allow our infrastructure to decay, and potentially force many into homelessness.  What kind of people would take such risks, and are they worthy of governing?  Clearly, my answer is NO.

HB2 is Damaging our State’s Reputation with Businesses 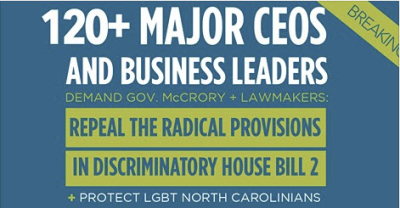 As of this writing (and I will update this as events unfold):

Simply put, this ill-conceived bill has cost our state billions in lost business, hundreds or thousands of well-paying jobs, and millions in tax revenue.  For our state representatives to pass a law that could have such drastic repercussions was bone-headed and moronic at the very least, but what is JUST as bad now, is the way they continue to dig in their heels and blame everyone except themselves for a horrible law.

HB2 Made a Mockery of the Democratic Legislative Process

For them to have done it in the manner that they did – from introduction to being signed in less than 12 hours with virtually no chance for debate or modification, is another reason I oppose House Bill 2.  Disgusting.  Absolutely disgusting.  And the reason for it is grossly obvious – to fire up the conservative GOP base of voters in an election year.  I’m not going to go into this further because it’s self-explanatory.  It’s wrong to abuse legislative power, which is exactly what they did.  And before someone points out the obvious – if Democrats have done anything like this, anywhere, anytime – yes, it was wrong then, too.

Democratic state Representative Billy Richardson (who voted for HB2), now says that he regrets his vote and will be supporting legislation in the upcoming session to repeal it completely.

HB2 is Based Almost Entirely on a Lie

The next reason I oppose the “bathroom bill,” as it’s come to be called, is for the simple reason that it’s based on a lie.  The lie is that this law is necessary to protect women from men who just pretend to be transgender to get access to women’s locker rooms, changing rooms, and bathrooms in public and/or private facilities in order to sexually assault women and girls.  But PolitiFact North Carolina, an independent fact-checking organization, together with the News & Observer, investigated the claims that such assaults have happened and have found almost no instances of it happening anywhere.  You can read more at the following links (which will be updated as I find more):

The simple truth is that 17 states and 200 municipalities in the USA have had laws like Charlotte’s ordnance for up to a decade, and the “predatory transgender person” is simply a myth. A lie.  A Boogeyman to scare you.  But like the Boogeyman, it doesn’t exist.

Let me be perfectly clear.  I have 2 daughters, one 21 years old and the other 9 years old.  I am not afraid of this happening.

Do I fear that one or both of my daughters could be the victim of sexual assault?  Of course!  It’s every father’s worst nightmare.  But I have no fear that a transgender man who identifies as a woman will ever end up assaulting either of my daughters in such a way that this law would make a single bit of difference.  It’s a nonsensical, imaginary argument based on fear and not on reality.  I am far more scared of the reality that they could be assaulted by a “normal” heterosexual male.

BTW – Who Will Enforce HB2? 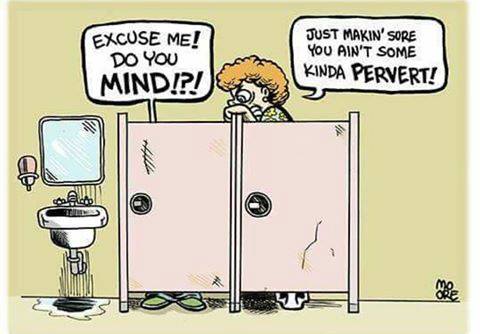 Forgive me for being really sarcastic for a moment, but given that the Legislature just created a new type of crime, how exactly do they plan to enforce it?  Seriously, how will they? 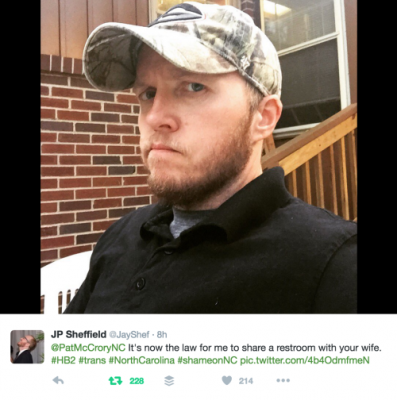 And how will transgender women, if they haven’t changed their gender on their birth certificate, manage when they now look like this?  Who’s going to check when they walk into the women’s bathroom?  Or if a transgender man, legitimately dressed as a woman, walks into the men’s room?  Somehow, I don’t see that working out too well.

HB2 Was and Will Be a Huge Waste of Taxpayer Money

First of all, the Legislature actually called a special session to ramrod this bill through, and it cost them an extra $42,000 to do it.  Why?  They were already coming back to session in April anyway; they couldn’t have waited a few weeks?  Hey, it’s not like they called special sessions for teacher pay, or funding for schools, or anything that might actually benefit all North Carolinians, but they could do it for this? 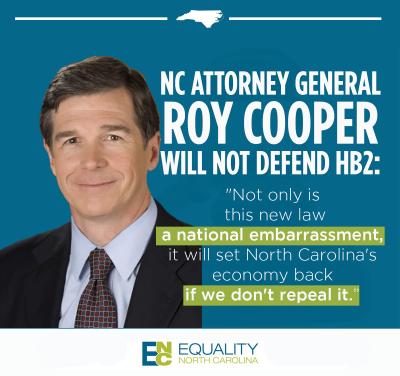 Not only that, as was completely predictable, HB2 is being challenged in court by several organizations, including the ACLU, Equality North Carolina, and Lambda Legal.  Since current NC Attorney General Roy Cooper has declined to defend the law on behalf of the state, stating that it is unconstitutional, the state will now have to hire outside attorneys and pay for them.  It does seem likely that this will end up before the Supreme Court, and the lengthy legal challenges will be expensive.

Quite frankly, I see absolutely zero benefit for citizens of North Carolina.  I really don’t.  All I see is a law that was ramrodded through in record time, that is highly discriminatory, and will cause tremendous financial damage to our state.  Numerous other states have recently stopped similar laws (Georgia, North Dakota, Iowa among others) once their Governors realized just how badly their state could be hurt.  With the almost instantaneous passage of HB2, there was no time for reflection on its (total lack of) wisdom.

The question now becomes: just how bad will it have to get, and how many North Carolinians will have to suffer temporary or permanent harm, before our legislators and Governor undo this monstrosity?  Or will the Courts save us first? 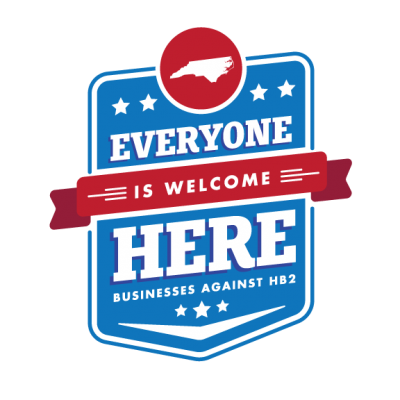 Here at Smiles by Payet Dentistry, we do not discriminate.