A Lion, a Dentist, and an Internet Lynch Mob

Oh boy, what a week it’s been for the profession of dentistry.  You do know what I”m talking about, right?  Cecil the Lion was killed by an American hunter who happened to be a dentist.  And while the outrage about the shooting of a lion is IMO certainly justified given the circumstances under which it happened, I have been shocked at the level of vitriol and hatred that has been unleashed in the media and across social media at my profession.  But really…why are they even connected?

I Only Shoot With a Big Camera 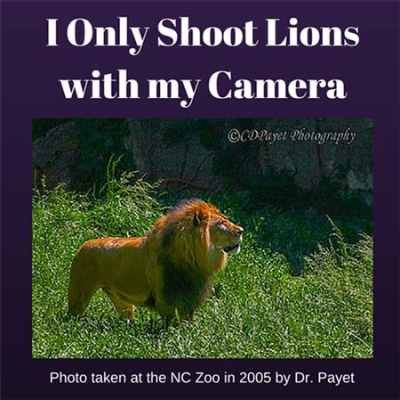 You may have heard the saying that “Photographers are cruel people: first they shoot you, then they frame you, then they hang you on the wall.”  It’s all said in good fun though, and as a photographer who would LOVE to go on a photo safari to “shoot” lions (from a very long distance away with a really big lens that just makes it look like I’m close), I laugh at that, too.  But hunting with weapons isn’t my thing.  Last time I picked up a gun was a .22 rifle with my grandfather about 33 years ago for shooting at paper targets.  I have no interest in shooting living animals, and to tell the truth, I find trophy hunting morally disgusting.  Interestingly, however, I understand that there are some benefits to it, in that restricted hunting has been used to raise huge sums of money for conservation purposes.  My colleague in Florida, Dr. Michael Barr, provides some thought-provoking background on how this works in his own response, which you can read here.  Whether you agree with him or not, I believe his points have merit and must be considered.  I am reserving judgement until I learn more.

But let me be clear: it seems very clear that Cecil the Lion was killed illegally.  Whether Dr. Palmer knew it or not at that moment, he bears some responsibility and must face the legal consequences of his actions.

The Power to Create and to Tear Down

As Dr. Barr also argues in his article, the Internet has become the 21st century’s lynching ground, where old and outdated ideas can die a swift and well-deserved death (such as the Confederate Flag FINALLY being taken down from South Carolina’s state capitol grounds) and massive amounts of money can be raised for deserving causes (the ALS Ice-Bucket Challenge comes to mind), but also where which real people’s lives are destroyed and reputations ruined in the blink of an eye.  Whether it’s justified or not.  Whether it is in the appropriate measure or not.

Look, I absolutely want Dr. Palmer to come forward, stand trial if he broke any US laws, same in Zimbabwe, and let the law take its due course.  But the lynch mobs that have gone wild online are now totally beyond reason.  Many thousands of false online reviews; public posting of his home address (work address is public knowledge, but home?); death threats, and more.  This is WRONG.  Public online lynchings are just as wrong as the real kind.  The man is married and has 2 children.  Their lives are also now potentially in danger, and there is no justification for that whatsoever.  NONE.  You can disagree with what Dr. Palmer did; you can think he’s a horrible person; you can hope that he faces the law and that the law does its job.  But threatening his life, ruining his entire business and life before he has his say in a court of law, is WRONG.  You know, here in the USA we have this saying, “Innocent Until Proven Guilty.”  Let’s at least wait until all the facts come out, but please people…..put the metaphorical ropes away and take a deep breath.  Two wrongs truly do not make a right.  Nothing that he did justifies the vitriol, hate, threats of violence, etc.

No, Dr. Palmer did not kill Cecil because he’s a rich dentist.  In fact, his being a dentist has not one damn thing to do with it…except that the public already hates dentists as greedy, lying, rotten, money-grubbing scumbags, and they just got another reason to feel justified about it.  And you know what?  The media knows that, and wow, have they gone fult tilt at dentists (in general, not just Dr. Palmer) because they know that people will read the articles!  Seriously…..think about it.  If Joe Plumber had a passion for hunting and saved up for 10 years to go do the same thing that Dr. Palmer did, would the headlines be screaming, “American Plumber Kills Cecil the Lion?”  DUH, of course not.  Maybe if it were another kind of physician or a lawyer, sure, we’d see that, but what if it were a Doctor of Philosophy (PhD) in social work?  Ummmm….”Doctor of Social Work Kills Lion!”  I don’t think so. 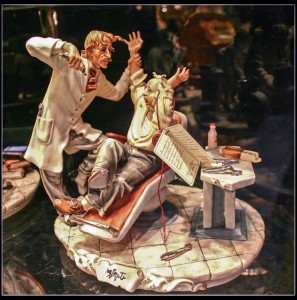 Dentists have a bad reputation but most really don’t want to hurt anyone.

I wrote an article on my personal blog in Oct. 2013 titled Are Dentists Greedy Scumbags? in which I tackled this question about how much money the public thinks that dentists make.  The Washington Post article I linked above talks a lot about how much dentists earn. Sadly, they never talk about how much it costs to become a dentist and be a good one.  Some typical numbers to consider:

Ultimately, I know that nothing I write about how hard it is to become a dentist, or how expensive it is to run a dental office, will make one smidgen difference in what is happening to Dr. Palmer or in the public pillaging of my profession.  Which is really sad.

Because really…why am I having to defend my entire profession and the many dedicated dentists whom I know because 1 of us killed 1 lion?

Besides, if you REALLY want to do something about the lions, why don’t you all start contributing to conservation groups just like we did for the ALS Ice Bucket Challenge, which raised over $100 million dollars?  I bet $100 million would go a long way towards saving lions, rhinoceroses, elephants, and other endangered species.  Here are 3 links to start: 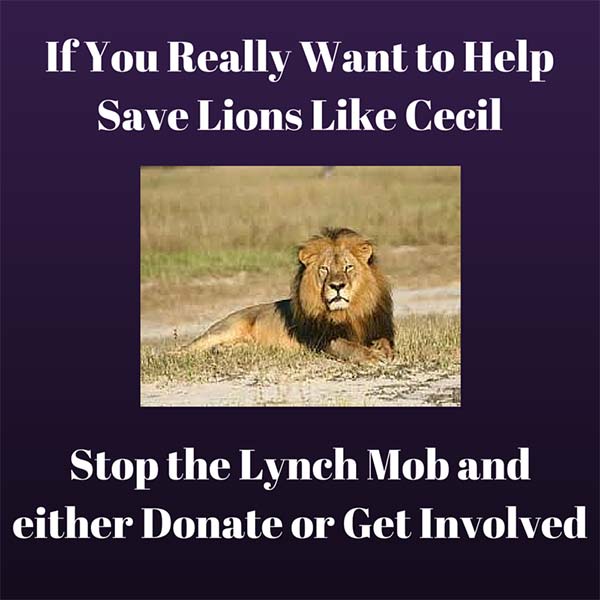 Metaphorically lynching 1 dentist or slandering the dental profession won’t do a damn thing except act as clickbait to get readers. 🙁

Besides Dr. Barr’s article linked earlier, here are a couple others written by colleagues whom I respect tremendously: